We kick off the show this week with Insteon’s comments about its abrupt closure and asset sale before trying to salvage some good news from Arm’s latest chip news. We’re getting a new M-class processor that’s going to be super capable for machine learning at the edge and other jobs. We also give you a preview of next year’s hottest tech, wireless charging for smart home devices. Then we pivot to industrial news with Amazon’s newly announced $1 billion fund for industrial innovation. So far Amazon is investing in computer vision and robotics startups, but warehouse automation, supply chain technology and logistics are all of interest for the fund. Amazon also released a new Alexa talent for the smart home, Sense raised $105 million for smarter home energy monitoring and Wyze introduced a garage door controller. We close out the news with a found Pixel watch, an update on the Sigfox sale, and Kevin reviewing an Airthings View Pollution air quality monitor. On the hotline this week we answer a question about a HomeKit hub that’s stuck in standby mode.

Our guest this week is Willem Sundblad, CEO of Oden Technologies. Oden Technologies is an industrial IoT startup that tries to bridge the gap between operational technology data and IT data. We discuss how its clients are using the software to help track the quality of their batch processes, and how software is helping its customers with supply chain challenges and sustainability goals. Paper manufacturing and plastics companies are facing issues getting enough raw materials with supply chains mucked up, and so are trying to use more recycled materials. But changing inputs means adjusting the process, which can be difficult and lead to poor yields while the manufacturer adjusts the recipe. Oden’s customers are able to tweak their processes for new inputs faster and without as much waste, which is something to be excited about. It’s one of the things I had hoped the IoT was going to enable, and I’m glad to see it happening.

This week’s show has a security focus with us discussing the Verkada hack, a new security camera from Abode, which basically puts expensive IP cameras on notice, and recommendations from Consumer Reports on helping victims of domestic abuse lock down their devices and services. We then talk about a rumored Alexa robot, a new Raspberry Pi chip designed for TinyML, the new State of Edge report from LF Edge, and Honeywell’s latest smart building acquisition. On the new products and services front, we cover Best Buy’s plan to sell fall detection and emergency services using the Apple Watch, the Sonos Roam, and a new air sensor from Airthings that detects particular matter. Kevin shares his opinion about the Logitech Circle View Doorbell as he continues to deploy HomeKit in his home. We close by answering a listener question about sensors for small businesses.

This week’s guest is Julie Setser, SVP of R&D at P&G Ventures. She and I discuss how P&G Ventures operates and what sorts of products they are interested in bringing to market. We talk about how the phone can help create a new relationship with a consumer, even if the product isn’t connected. We also discuss what P&G has learned from its previous forays into connected devices and how that influences Procter & Gamble going forward. I like the holistic view they are taking around smarts, consumer products, and respecting the user’s time and experience. Enjoy the show.

This week’s podcast kicks off with the news that Project Connected Home over IP (CHIP) will also have a commercial element focused on offices, apartments, and public buildings.  Then we focus on edge computing with a new way to bring machine learning to the edge and Arm expanding its free IP license program to some of its edge ML chips. We also talk about the new IoT Cybersecurity bill that passed the Senate, a virus prediction score on Airthings devices, and another new Wyze product. We round out the news with LoRaWAN, facial recognition laws, telemedicine, an upgrade to Google Fit, and a new name for Plume’s Wi-Fi service. Kevin shares his thoughts on the Eero Pro Wi-Fi system, and a quick impression of the new HomePod mini. We end this segment by answering a question about updating old Z-wave switches.

Our guest this week is Katia Obraczka, a professor of computer science and electrical engineering at UC Santa Cruz. She’s designing a sensor network to detect and monitor wildfires. She explains how she’s handling a lack of connectivity, power constraints, and budget constraints, all while trying to build in resiliency. After all, elements of this network are in fire-prone areas, and it stands to reason some of it will burn. She discusses how she’s using simulations of the network to figure out power budgets and what types of sensors she needs. She also talks about using drones as flying access points to build in more resiliency in case other forms of connectivity burn. It’s a good way to think about building a sensor network for a harsh environment.

This week the show starts with an overview on IFTTT’s new paid plan and then dives into the recent update on Project Connected Home over IP. There’s not a lot of news, but the effort is still progressing, which is something. We also discuss the new long-range Z-Wave standard,  a new court ruling on geofencing data collection, and Apple’s upcoming event. We then discuss the challenges that Bluetooth-based contact tracing efforts face, a new smart home alarm system retrofit from Konnected, a new talent in an old air quality sensor, and some new Philips Hue products. From there we dig into some new Amazon Alexa skills for apartments and for voice calls before ending with Peloton’s new bike. We also answer a listener question about putting Alexa in different households under the same account.

Our guest this week is Linden Tibbets, the CEO of IFTTT. He’s on the show to explain the details behind IFTTT’s new Pro plan, which I’m guessing that most of the audience will want to investigate. The Pro plan offers users more complex applets, lower latency, and actual support, but it comes at a price. Tibbets explains why users can set their own price for the service for now, and how he hopes to get people to pay $9.99 a month eventually. Tibbets also explains what free users can expect and gives an update on the other side of IFTTT’s business — selling integration services to brands. If you’re an IFTTT user, you’ll want to listen to this show, and if you’re not an IFTTT user, maybe you’ll want to be after hearing the show.

This week Kevin and kick off the show on a serious note, pointing out that the U.S. is approaching China in terms of the number of people per every IP camera. We draw a line between that fact and the surveillance capabilities that Ring allows through the Neighbors app, before offering a smidgen of hope in the form of a new federal law. We then jump to the title topic — our annual gift guide that features 10 presents that won’t disappoint. One of them, the Philips Hue Sync Box, is the topic of a review from Kevin. After that, we hit a security flaw in Blink cameras, a new Ring light, and Google’s new alarm clock feature. We close by answering a listener’s request for funny smart home mishaps. 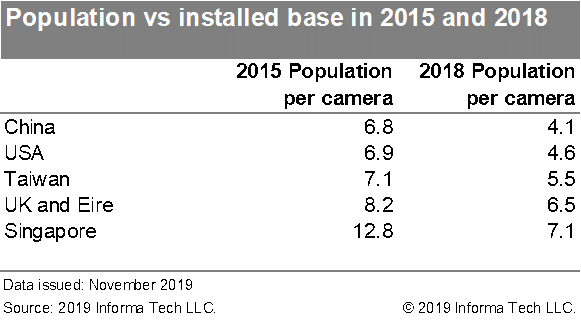 This week’s guest is Dr. Irene J. Petrick, senior director of industrial innovation in Intel’s IoT group. Petrick has conducted hours of research on the industrial IoT and the efforts companies are making to transform digitally. She talks about her newly released research as well as the skills that manufacturers believe their employees need today and in the future. I think those manufacturers are short-sighted and Petrick and I spent a lot of time discussing the shift from transactional business relationships to ecosystems. You’ll enjoy the show.